Being a female in a male dominated industry 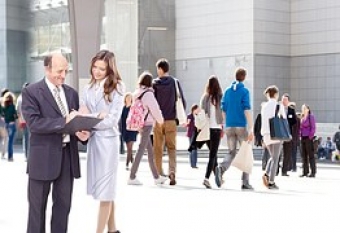 Hope you’re all having a great week and settling into the month of September. How are we almost Fall? Soon enough the W word will be here….

Today I wanted to tell you about an experience I recently had at a conference. While waiting in the hotel lobby for a colleague to arrive another agent approached me and asked if I was there for the convention. I quickly said, “Yes” and he said “ How nice of you to join your husband while he’s working”. I quickly corrected him and said I wasn’t there for my husband but for me as an attendee. He apologized and said he should have never assumed. You all know what happens when you assume something right?

The above scene is nothing new to me, it’s actually something I encounter and see almost everyday. You see I’m a female working in a male dominant industry. It doesn’t matter that I have paid my dues, reached my numbers, read every contract that we represented to ensure legality, looked after Health and Safety (because I was asked out of trust) or followed policy and procedure. Even after all these accomplishments and experiences I can say that being a woman in the car business industry is still tough.

I am proud to say that the guys (and gals) I have worked with in the past have always treated me with respect because of my accomplishments and respect for their positions. I can say proudly say that I have been paid the same salary as a man because in the Automotive industry your salary is based on your position not on gender. Even though I’m paid accordingly it still bothers me that in most people’s eyes a female cannot run a company in the Automotive Industry. Most will ask these questions “How did they get there?”, “Who do you know?”, these same questions would never be asked of a man. I still find it surprising when in a room of males that when the females can add to the conversation they are often surprised.

Even better 70% or higher the car buying decision is based on the female opinion and more and more women are purchasing vehicles new and used on their own. I recently spoke with a customer that purchased a Truck. She had to go to 3 stores before anyone would speak to her and when that Salesperson at the third store did speak to her, he asked if her husband was on his way and she wasn’t even married! When she went to the fourth store that salesperson asked, “ What are you going to use the truck for?” She then mentioned she had 3 dogs and the salesperson quickly explained the benefits of the vehicle and how it would help to transport the dogs safely. I don’t think it should be a shock to guess who actually got the sale in this situation.

In closing I want to say that I am far from being a feminist however I hope that one day it won’t matter if the salesperson is a man or a woman that the sale will happen based on the product, knowledge and professionalism of the individual. Never assume anything for you may loose that deal and the next and so on…

As always have questions? Simple ask!